Catholic Prayers To St. Christopher , He is one of the most well-known Catholic Christian saints. He is a saint, as well as a martyr. He may possibly have been known as Reprobus. In 251 AD, he appears to have died under the Roman Emperor Decius. In any case, most Catholics regard to him as Saint Christopher, and his medals and popular devotions to him are among the most widespread in Catholic piety.

Apart from his status as a martyr, there are no original documents related to St. Christopher, only myths and traditions that have been passed down down the generations.

According to these legends, St. Christopher was exceedingly tall, even described as a giant! He was unquestionably a man of considerable physical size. But, more importantly, he was a spiritual giant and an unmistakable model and motivation for Christians.

One day, Christopher decided that he wanted to serve the finest king he could. He introduced himself to his local monarch and began duty until he witnessed the king cross himself at the mention of the devil, demonstrating that the king believed the Devil had more authority.

St. Christopher then made the decision to serve the Devil. During his quest, he came across a gang of robbers led by a man who referred to himself as the Devil. However, when this leader avoided a Christian cross out of fear, St. Christopher discovered that there was someone much more powerful than the Devil.

Great St. Christopher, you sought and found the mightiest master in Jesus Christ, the Almighty God of Heaven and Earth.
Faithfully serving Him with all your might till the end of your life, winning countless souls for Him and finally losing your blood for Him, get for me the grace to bear Christ always in my heart, as you once did, bearing Him on your shoulder.
So that I may be strengthened to triumph over all temptations and resist the enticements of the world, the devil, and the flesh, and that the forces of darkness may not prevail against me.

Prayer for a Safe Journey to St. Christopher

O glorious St. Christopher, you have inherited a lovely moniker, Christ-bearer, from the magnificent tradition that while carrying people across a roaring stream, you also carried the Child Jesus.
Teach us to be faithful Christ-bearers to those who are unaware of Him.
Protect all of us who travel both close and far, and ask Jesus to always be with us.

While Traveling, Pray to St. Christopher

Dear Saint Christopher, please keep me safe today as I travel down the road.
Please give your warning sign if danger is approaching so that I can stop while the path is clear.
When my eyesight blurs out of nowhere, be at my window and direct me through.
Carry me safely to my destination, as you did Christ in your loving embrace.

O Lord, give me a steady hand and a keen eye.
That no one is harmed as I pass by.
You gave life; I pray that no act of mine takes away or taints that gift of thy.
Protect those who bear my company, my Lord, from the ravages of fire and all misfortune.
Teach me to use my car for the benefit of others, and not to overlook the beauty of the world out of a desire for excessive speed, so that I can travel with delight and courtesy.

St. Christopher, holy saint of travelers, keep me safe and bring me to my destination. 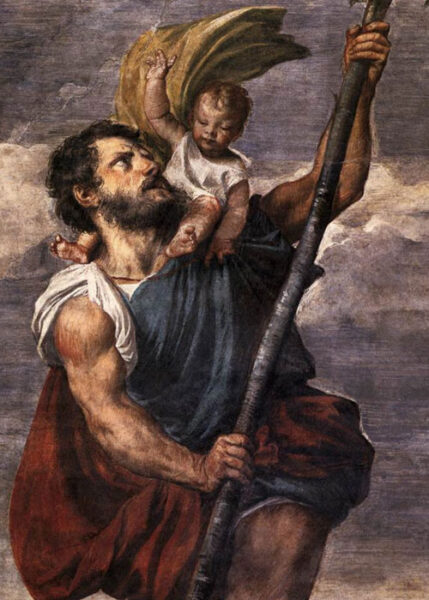 Traveling by land was difficult and time-consuming until the railroad arrived in the mid-nineteenth century. Travel was mostly done on foot because few people could afford horses or oxen to move their wagons. There were Roman roads in the Mediterranean world, but many of them were abandoned over time.

People who traveled in groups were more likely to be safe. The distance between the roadside inns ranged from 20 to 25 miles, and the passengers needed to get in the safety of the settlements before dusk. If they did not arrive by dusk, their belongings could be stolen by local gangs. Because there was no long-distance communication, the tourists had no idea if the inn to which they were travelling had enough food. When they came, they were offered whatever was available, and if there was hunger in the area, they went famished. Everyone in the inn slept in the same enormous room, and any monies or valuables the travelers carried had to be hidden.

Traveling by ship was just marginally better. There were no luxury accommodations; the galleys carried sand or wheat if sailing north from Egypt, and silver or olive oil if sailing south from Greece and Rome. Travelers remained on the deck. They were forced to provide their own food and shelter. Cooking fires were extinguished in bad weather, forcing travelers to eat whatever they brought cold.

We can see how vital it was for travelers to have a saint to whom they could pray for protection in this situation. Their petitionary prayers were frequently addressed to St. Christopher. There are numerous legends about St. Christopher, who lived in the Eastern Mediterranean. He was said to be a large and powerful man looking for the most powerful person to serve. For a time, he felt he’d found it in Satan, who was guiding him to a life as a robber. He spent some time with a gang of criminals that preyed on unsuspecting passengers. Christopher found that one of the robbers feared Jesus more than Satan when he witnessed him make the Sign of the Cross. Christopher abandoned the gang in order to serve the more powerful Lord Jesus.

Rather than preying on travelers, Christopher stayed near a river to assist anyone who needed to cross. One day, a child requested that he be carried to the other side. The child grew heavier and heavier as Christopher carried him across. Christopher made it to the other side just in time. Christopher found he had carried the Lord Jesus Christ, despite his belief that the load of the entire world could not be bigger than that child. Every day, Christopher was carrying out Christ’s ministry by assisting travelers.

A heathen ruler eventually martyred St. Christopher. However, the memory of his help to others during their travels was preserved. St. Christopher’s most popular depiction is of him holding the Christ Child, which may be found on holy cards, stained glass windows, and sculptures of all sizes.

St. Christopher is a well-known saint whose intercession is sought by travelers, soldiers, sailors, those caught in storms, and transportation workers. He does not have a universally honored feast day in the Roman Calendar, but he is remembered by several local churches.